For me it strikes when I see a thing -- a movie, a blog post, an image... or read a book. And then, I'm in the throes of it. Regardless of the intensity of the latest RPG project that's sitting on my desk waiting for completion, I can't resist the draw.

So in my first post since February, I will appropriately discuss some of the ADD that's seized my attention (and prevented blog posts...among other things).

It's a system you can't resist tinkering with.

I have a late-Tokugawa Japanese thing... I may have mentioned it before. While I was unemployed earlier this year, I did what every good unemployed bum should do: Spent my unemployment monies on liquor, GaryCon, and fancy clothes and laid around the house watching Samurai movies. Lady Snowblood did it for me -- I immediately embarked on The Princess Blade -- A Chanbara hack for Whitebox S&W. Probably a mini-game, but I've got so much written for this thing, that I can resist releasing it either as an actual product or just a free-fun thing. Chanbara-style RPG'ing has always had a special place in my heart. I'll post a few things from the manuscript later this week.

I blame +Eric Hoffman for this one. I've had a semi-developed WWII setting since the early 2000's, and never got to run/play it for anyone. It's based on the Jedburgh missions, late-1944 in Occupied France. There's an alternate history twist once the initial stage of the campaign unfolds that tries to mimic the look/feel of Twilight 2000, but with WWII-era equipment and political situations. The Amazon series Man in a High Castle didn't help me resist this one. I'm running a playtest with +Alex Perucchini, +Jason Sholtis, +Jason Hobbs, +Cody Mazza and the aforementioned Hoffman. The rules are dead simple from the player's perspective. From the GM's it's a toolbox for building a mission-based sandbox in occupied enemy territory. I think it may be portable to different genres, and I liberally stole from +Paolo Greco's ideas with Gangs & Bullshit (further inspiration while at GaryCon.

It's my system of love at the moment. Natural fits here. 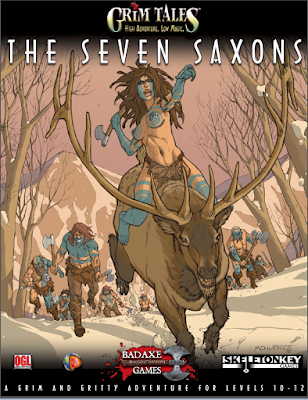 I did a thing because someone else did a thing (scroll down to Dark Ages D&D posts. Fucker. I immediately re-tooled the Seven Saxons -- old d20 adventure by Bad Axe Games -- to a DCC funnel extravaganza for my invading Viking 0-levels.

From there, I let it lie a bit, but now I'm back consuming research materials and writing. More stuff on this one to come. I'll post some of my stuff on this one. It's going to be fun, I think. I'm thinking a West Marches style recurring game online, if I can swing it. More news later.

And I still have Ketsuin, the DCC-ified fantasy version of a late-classical era Japan. +David Fisher is hard at work on art for it. Expect an announcement soon.

And the re-tool of Angels, Daemons and Beings Between. But you already knew about that one.

So, gamer ADD has me in its clutches, in addition to a weekly B/X game, a weekly DCC game, and a bi-weekly Operation Unfathomable game (Whitebox S&W with a +Jason Sholtis twist). But, I wouldn't trade it for anything. Great day to be alive and a gamer!

First Twilight 2000 portrays a Warsaw Pact first strike in Europe vs NATO with a limited mutual nuclear exchange. This war ends in a whimper, an exhausted post apoc stalemate with massive desertion and a total break down of the chain of command on both sides.

By late WWII I am having difficulty imagining a scenario which could lead to stalemate between the Allies and the Axis.

TGM: It's a developing situation. The game actually starts in 1944 -- and is a behind-enemy-lines procedural campaign. Depending on character action, it could take a turn that ends up in a situation similar to Twilight 2000. I'm really testing out a bunch of concepts at the same time -- mostly the procedural part. I'll have a longer post on what I'm trying to do later...hopefully this week. Thanks for the comment!

The most plausible scenario I can construct for a ETO nuclear post apoc draw in the aftermath of WW2 would be the Western Allies along with the remnants of the Wehrmacht launch Operation Unthinkable vs the Soviets.

The Western allies launch a surprise attack on Soviet positions to "impose upon Russia the will of the United States and the British Empire" a "square deal for Poland" (Polish sovereignty) and to enforce the territorial and "Declration of Liberated Europe" terms of the Yalta conference which the Soviets had agreed to and then promptly ignored.

The point of timeline divergence could be mid 1944 which see an excellerated US Campaign in the Pacific and faster nuclear development and use by the US. The Soviets own nuclear weapons program is excellerated and Operational by mid 1946.

With Japan on the ropes before VE Day the Western allies press thier luck against Stalin in Summer of 1945 seeing tremendous gains in the first year only to be driven back with Soviet nuclear weapons.