Squibs and the Rat Things 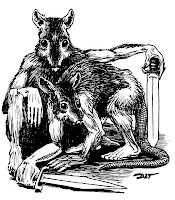 In my constant search to convert OSR and other RPG content to DCC RPG, I was thinking about the stirge and the were-rat. Were-rats have ever been a favorite of mine, since that evocative image by David Trampier back in the old Monster Manual. Stirges, of course, are just annoying little gits that seem to give even higher level characters fits.

All of this came about when I was running Barrowmaze for the home crew. Though I don't think stirges occur in an actual encounter, they louse up all the wandering monster tables. So, on the fly, I created squibs as detailed below. Then, on some random table somewhere, as I was crafting the world around Barrowmaze, I rolled up a "dolmen" that was inhabited by were-rats. I really liked the idea, but I didn't feel like were-rats fit DCC -- though a shapeshifting curse fits directly into some of the lore within my campaign world.

Anyway, this reminded me of a free adventure over at dragonsfoot -- The Corrupt Crypt of Ilmater. It's not a fantastic adventure, but there was something about it that

I liked and it fit into my campaign pantheon. And, it was populated by were-rats.

So, Ilmater's corrupted crypt became The Corrupt Crypt of Spaeluc. Stirges became Squibs and were-rats became Rat Things... It'll all make sense when you read below...

Rat Things are servants of Epaphro, the Demon Rat of Hell’s Sewers. Those “blessed” by the Demon Rat change into a Rat Thing – a humanoid rat-like creature with a fringe of feelers around the mouth (which is sealed). Each of the tentacle-like feelers has a small mouth crowded with teeth. They may also turn into a squib – a flying rat thing with leathery wings and similar mouth fringes (essentially a stirge with a different coat on).

Those taking more than 50% damage by a Rat Thing’s natural attacks (claw or bite) must make a Fortitude save DC 9 or contract a painful malady – for the next 30 days, the victim cannot sleep properly (no natural healing) because of several minor, but distracting cramps that constantly lodge in the extremities while at rest. During this time, Epaphro haunts the victim’s dreams, essentially casting a forced Patron Bond. A Cure Disease or successful Lay on Hands (4 dice) during this time banishes the curse from the victim’s blood. If the disease is not cured in this time, the victim has become a servant of the Demon Rat. At this point, only a remove curse or similar miracle can cure the victim.

Any time the cursed victim's hit points drop below 50%, he or she must make a Will save (DC 13) or transform into a Rat Thing (75% humanoid form, 25% squib form). A ritual, led by a true adherent to Epaphro and lasting several months, can train the victim to control the transformation.

Rat things have three forms that they can assume at will: humanoid (depending on their original race), a rat thing hybrid, or a squib (see below). A full transformation takes one full round.

As a humanoid or hybrid, rat things wield normal weapons and armor (note, their AC above assumes studded leather armor and a short sword). In squib form, they attack as described in the squib description below.

In hybrid form, a rat thing appears to be a humanoid naked mole rat with the tentacled feelers of a squib and large black eyes.

Squibs are creatures that resemble a cross between a star-nosed mole and a naked mole rat...with bat wings. They are about the size of a small dog. When attacking, the squib flies onto its victim and bites with several of its feelers, each equipped with a small, toothy mouth. One attached, the squib drains blood at a rate of 1 per round.

An attached squib may be ripped off of a victim with a successful unarmed attack (to hit an AC 10). This deals 1d3 damage to the victim, though the squib can be crushed to death in one round. There is a 20% chance that the squib is so positioned that the victim may remove the creature, though typically they attach to the back of the victim to avoid such attacks.

NOTE: If the squib is a transformed Rat Thing, it has the HD, attack bonuses and saves of a Rat Thing, as well as Epaphro's Blessing and Transformation abilities.