Along the great Izgoni caravan route over the dunes of the Ulrik Wastes lie the ruins of a small settlement. Once a desert spring bubbled up here, and the settlement was a waypoint for travelers and their animals to water and rest in the shade. Though the tumbledown adobe structures are still used as emergency shelter from the many sandstorms, the settlement is generally bypassed as another dead husk amongst the dunes of Ulrik.

Investigation of the settlement reveals little, though the simple bricked shaft that once served as a well in the village center may draw the curious. Either storm or the disgruntled filled the well shaft with sand and it is only ten feet deep.

On the northern wall, only partially exposed near the surface of the sand, one of the bricks is stamped with a faint symbol of a serpent entwining a palm tree (Search/Spot DC 15). Those with knowledge of the ancient peoples of the Ulrik know that this symbol was for the Caliphate of the East Winds, a small nation that controlled a significant portion of the Izgoni caravan route. With an Intelligence check (DC 18), those with knowledge of the region know that the Caliphate was ruled by the priest kings of the ifrit, Afara, and that their holy warriors roamed the Izgoni route protecting merchants and pilgrims.

Digging out the clay brick reveals a metal bar, about three inches long set into the stone. The bar can be pried away from the wall, which opens a secret door about 3' below the surface of the sand. (Reflex DC 13 or slide into the chamber beyond). 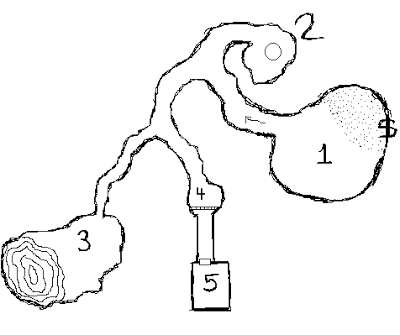 1) Pile of Sand – The fall to the top of the sand pile is ten feet, and though this causes no damage, those affected must make a second DC 13 Reflex or slide to the bottom of the 20’ tall sand pile that half buries this small natural cavern. A passage exits to the west.

The fall and light surprises several rats who scurry away squeaking.

A skeleton half buried at the bottom of the pile (DC 9) wears a tattered turban with a small garnet set in silver pin (25 gp), a gold signet ring stamped with the symbol of the Caliphate (DC 15), a rusted steel helmet and hauberk. A perfectly preserved leather sack on its belt holds 200sp and a scroll written in the ancient language of the Ulrik peoples (this is a writ authorizing the magistrate of district 27 to collect such taxes as are due the Caliphate from the village of Yaiden)

Those that examine the skeleton notice that both the man's legs were broken. Those with medical knowledge understand that this was caused by blunt force trauma (a hammer) and not a fall into this chamber.

Disturbing the skeleton also disturbs the spitting cobra lairing inside its chest. It attacks with surprise unless the examiner states they are carefully looking for hidden enemies, etc.

2) The Secret Well – A stone brick hemisphere about 4’ tall with an opening at the top stands in this natural chamber. This well drops off into darkness. Note that there is no moisture in the room or smell of water from the well. Descending the well requires 100' of rope and leads to roughly circular chamber (30' radius) with a pile of skeletons with dried muscles/viscera beneath the hole. A detailed examination reveals that all been stripped of clothing and killed with a single hammer blow to the forehead (see Area 5).

3) The True Well – The original spring receded to here. The pool is 25’ deep, though a series of cracks and small passages lead down into the aquifer (impassible without extreme magical means).
The shore is muddy stone with the footprints and scat of rats (rats will scatter if surprised, though they move and hide at approaching lights). Cave cricket, crayfish and other insect corpses abound. Walls crawl with various blind insects. Note the effects of the book (Area 5) if brought into this room.

Carvings on the wall depict symbols of the ancient caliphate and a religious symbol (DC 12) depicting a curved knife -- this is the symbol of Afara, the ifrit "god" of the Caliphate.

If a new well is dropped over this spot, it supplies water to a village of ~100 people and animals for the next 15 years before drying up.

4) Bricked up chamber – This small natural chamber is intersected by a brick wall concealing the tomb of the guardians of Yaiden. Each brick is carved with hundreds of warding symbols associated with Afara (DC 12). These symbols are not magical (DC 15; or detect magic). The bricks can be smashed down fairly easily, though it requires a hefty hammer and an iron spike or some similar combination of tools (2 turns). With a normal hammer/warhammer alone, this takes 1-2 hours.

Beyond the wall is a worked stone and brick passage. The passage walls curve to a mere 5' ceiling and the clay-stucco walls are crowded with runes, symbols and sutras dedicated to Afara (DC 12). Moving into this passage causes various random runes to flash green, glow and fade to darkness in a complicated and continuous pattern. This causes confusion (DC 12 Fort) for 1d3 turns. The effects can be defeated simply by closing the eyes, covering the walls somehow, magical darkness, or the like.

5) The Tomb – The plain seal to the tomb is a solid stone slab set into the surrounding walls (hammer and spike to open, as above, though anything less than a sledge and spike makes it impossible to break). When broken, a foul gust of gas issues from the very stone, coalescing as a Guardian Jinn, who attacks intruders immediately.

NOTE: Moving back down the passage results in the same confusing flashes of runes.

The Guardian Jinn transforms from a sentient gas to a humanoid entity composed of living water. When attacking, it extrudes a sword from its arm. When struck by this sword, opponents must make a DC 16 Will save or have all magical effects dispelled for 2d5 rounds. This includes any magical items held or worn by the opponent (a separate Will save for each item at the bearer's bonus). When the guardian jinn’s hit points reach 0, it transforms into a gaseous form and becomes locked inside its holy vessel for 1,001 nights.

Tomb of the Chosen

Within the tomb are two skeletal figures dressed in rich robes and jeweled turbans seated on stone chairs facing each other. One is kitted in pristine chainmail, a shield with a tree device painted on its face, and a stone-headed hammer (this will be familiar to those examining the bodies at the bottom of the secret well). The second holds a book in his lap with a tree device painted on the cover. (Described below)

The turbans turns to dust when touched, though 300 gp worth of gems can be recovered from each.
Removing the book from the skeletal hands causes a swarm of biting insects to pour, seemingly, from the chest of the skeleton. The swarm forms into a vaguely humanoid form and attacks!

These artifacts were created by the ifrit, Afara, for warrior-priests in its service and include:

Those that choose to bear the Holy Accoutrements are making a holy pact with the ifrit, Afara. Though, until Afara is encountered, there is no outward sign. The artifacts themselves cannot bear to be separated from each other. Each bearer of separated Holy Accoutrements must make a daily DC 13 Will save or be compelled to seek out the other artifacts with the intention of reuniting them. This compulsion causes a -2 to all action dice, saving throw and mental ability checks if the bearer is not actively seeking out the other artifacts.

Those bound to gods opposed to Afara that bear one or more of the Accoutrements receive a cumulative +1 increase to their disapproval range per day. This increase cannot be removed by time or sacrifice, though it resets at a rate of -1 per day that the artifacts are not borne.

When Afara is taken as a patron, the Holy Accoutrements are said to “awaken” with purpose and power. ·

The Holy Writs of Kalid Sakhr

The sorcerer Kalid Sakhr gathered many of the spells that Afara gifted to his Chosen. These spells may be learned and cast by any wizard or elf, though such actions may incur a mortal debt with the ifrit.
Additionally, the spellbook has an insidious curse. Those carrying the spellbook attract a variety of vermin (insects, rats, bats, etc.). When faced with an attack by such creatures, the bearer of the spellbook is targeted exclusively.


NOTE: Every turn while in this dungeon, the bearer of the book draws 2d10 rats -- they do not attack, but follow the bearer and attack anything that seems to be threatening. They drift away at a rate of 5 per round after leaving this dungeon. If the bearer enters the True Well (Area 3), hordes of cave insects are drawn to the bearer (including crayfish from the pool) causing a chaotic scene of rats attacking swarms of insects. 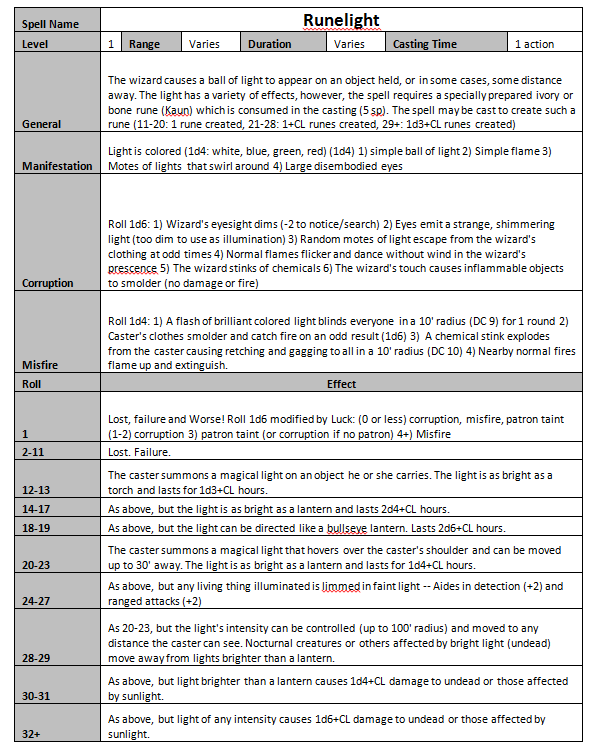