We did a small thing for DCC, just to test whether anyone was interested in a semi-zine-like book of short adventures -- similar to In the Prison of the Squid Sorcerer, but shorter/simpler in scope.

The idea of Pulp Weird Adventures (and Squid Sorcerer) was three-fold: 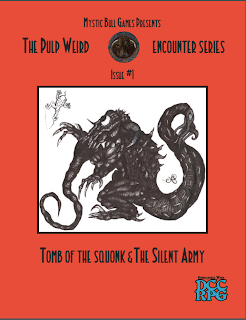 Pulp Weird Adventures #1 gets us started with two short adventures.

The first one, by +Daniel Bishop, Tomb of the Squonk, was actually written for Squid Sorcerer, but fell out of that book due to length. It's a short adventure, but packed with some weirdness and has a few campaign implications if the Judge decides to use it.

The second one, by +Charlie Scott, is his first adventure for DCC -- Called the Silent Army, it contemplates the implications of an otherwordly invader to a simple fantasy setting. How those seeking power get enthralled by such power. It's a good one.

So, take a look at Pulp Weird #1 and let us know if you'd like to see more, weirder and pulpier adventures in the future.