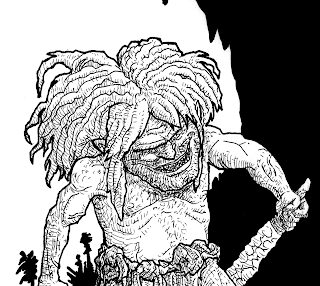 Our upcoming book, The God-Seed Awakens, is getting closer to publication! We're deep into editing, layout and art. Over the next two weeks, I'll be previewing some of the art and content, as well as talking about plans for the coming year for the Mystic Bull.

Here's a preview of the Tokar (PDF), a minor faction in the underworld affected by the incursion of the god-seed.

A portion of Praeder Island is featured in the adventure Forsaken Reavers of Praeder Peak by +Paul Wolfe in D.A.M.N. Magazine, issue 1. The island has a long history, both in my fictional campaign world and in my actual gaming.

I've used Praeder for about 10 years as a mysterious jungle island where lurk evils from throughout history. The island is forever being "discovered" by the next major power seeking to exploit the rich wood, exotic animals, and, in a number of cases, the arcane resources of ancient empires.

This is Praeder as it appears about 1,000 years before the PCs arrive on the island during the Forsaken Reavers adventure.

This time period is the current setting of an extended campaign that began with Frozen in Time by +Michael Curtis  and The Gift of Suss by +Daniel Bishop. The prehistoric PCs have been thrown here through arcane pathways and stranded in the southern reaches of the island, behind the Barrier. This is also the setting for a forthcoming adventure from Mystic Bull Games: The God-Seed Awakens. We'll preview God-Seed over the next few weeks leading up to its release. 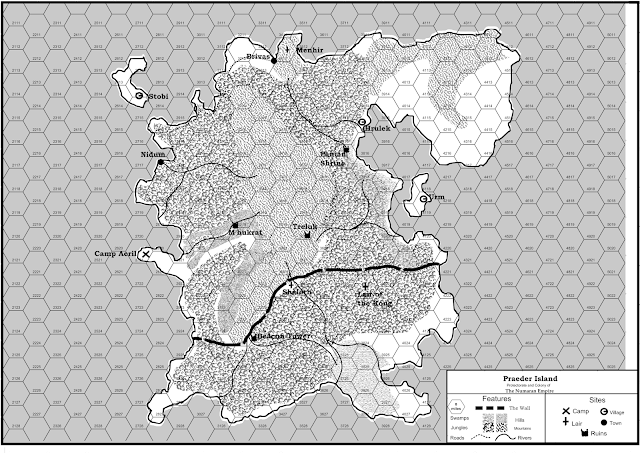 The Northern settlements of Brivas, Stobi, and Nidum, as well as Camp Aeril, comprise the Numaran Empire's foothold about 40 years after discovering the island.

The villages on the eastern shore, Hrulek and Urm, are major native settlements built on the remnants of the Panian peoples, an advanced race of builders and arcanists that thrived here over 5,000 years ago. It was the Panians that built the great city of Treluk, in the central highlands and M'hukrat, shrine-city to the demon lord of the same name. They also built the Barrier, a stone wall holding back some ancient evil brought to this world by the diabolists among the Panians.

It was during this time that the Queen of Abominations rose from the ranks of the Panian arcanists and sought to extend the people's demonic reach across the world. That was before Skal Silverhand and his band of reavers descended on the Ruby Palace, destroying the Queen of Abominations and her crag demon thralls, about 3,000 years ago. Their memorial menhir stands near the pinnacle of Praeder Peak on the northern tip of the island.

Behind the Barrier now are dinosaurs, demons, and the Great Kong, as well as the recent arrival of Shaloth, the dragon-like god-thing featured in The God-Seed Awakens and the beacon tower featured in Tower Out of Time by +Michael Curtis

Next up is Praeder in the time of the PCs in Forsaken Reavers of Praeder Peak, where another far reaching empire has "discovered" the island and seeks to exploit its secrets for a new age.
Posted by Paul Wolfe at 15:51 No comments: