Blame It On the Keep

Over the Thanksgiving holiday, I had a lot to time to game at home and online. I blame +Eric Hoffman  for re-introducing me to an old obsession: Keep on the Borderlands. We managed to get one session in over the holidays, and he's promised a few more over the Christmas holidays. Immediately after the online session, I set up to run the module with my home group. We normally play DCC RPG, but I've been known to switch them back and forth between B/X/etc and DCC. Everyone has extant characters -- so it was fairly easy to move them to the little keep in the wilds and set them loose. Within one session, they had already rooted out a cult spy, made a few fast friends (henchmen), lost one of their fast friends (poor Crannich the dwarf...we hardly knew ye) and sent the kobolds off on their own mini-Trail of Tears (no -- they didn't kill the women and children). 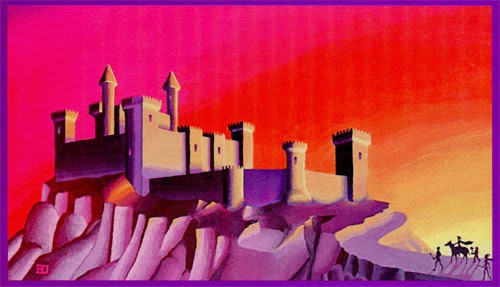 This adventure module has always stood out to me as a model of how such content should be produced: Present the situation without embellishment and let the characters and the DM tell the stories. Of the old school modules that I have the most experience with, I think KotBL did it admirably well. It's also the best "first module" I've ever seen and should be used as a model for anyone producing OSR "beginner" modules.

The biggest challenge for me, as DM, is making the content fresh. I've played or run parts of this module (sometimes both) about 100 times. So, after experiencing the nuanced changes that +Eric Hoffman introduced, I set about working through my own.

In a struggle to find a nice player's map (black and white) for my players, I ran across this post over at Goblinoid Games. Black Wyvern modified the wilderness map for KotBL and spread out the various caves over the whole wilderness area. I really liked this concept and immediately adopted it...  (he also mapped the individual caves with mods for this tact). Unfortunately, now it was even harder to find a player's map... So, I took his map and made my own.

This folder over on Google Drive has two PNG files: DM and Player's map, and an SVG file so you can make your own changes.

So, rustle up some B/X/etc characters and get your ass to the border. There's trouble brewing out there that only the liberal application of magic and steel can solve.
Posted by Paul Wolfe at 10:44 No comments: