DCC in the Land of the Savages

Before Frozen in Time, Daniel Bishop was working on a caveman adventure for me. This was before I understood the complexities of the DCC RPG license, and I got in some trouble for commissioning an adventure without pre-clearing it with Goodman Games. Lesson learned. Water under the bridge. It's all good now.

But, the damned adventure was really good. And it was a perfect lead-in to Frozen in Time. So, we played it at home anyway. About half of the cavemen made it through Daniel's adventure and through Frozen in Time. Half of those survivors were thrown into the distant past on Praeder Island, via The Tower Out of Time (another great Michael Curtis adventure). Praeder Island also made an appearance in the DAMN adventure: Forsaken Reavers of Praeder Peak. Anyway, the poor cavemen characters had a few adventures, encountering the Baboon Men, getting cursed, and various other niceties.

That was fun and everything, but we still had half our cavemen characters back in the neolithic era and their players really wanted to play. So, I did what I do -- I improvised a campaign setting on the fly using various sources, including UK5: The Eye of the Serpent, which I partially converted to DCC RPG. When we got to Area 16: The Eyrie, the idea of it was intriguing to me, but woefully underdeveloped. I was working on some other stuff within the campaign world (rise of the cult of Nergal, being one of them), and decided to develop out a few things behind the Eyrie.

This is the product of that work -- an unofficial, free, fan-made adventure for DCC RPG. It's got cover art, thanks to +David Fisher, and a map I created, but otherwise, it's all adventure. And it's all open-content. Use it however you want.

Pick up the Steading of the Nergalites right here: 1-up, 2-up, Booklet (if you want to print yourself a book)


And as always, let me know what you think about it.

Also, here's a hex-map of the area. After you read through Steading of the Nergalites, keep your eye on the northwestern area of the map (around the village of Ogg). Something fun is coming right around there in a week or so. 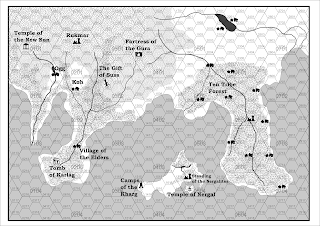 Awesome stuff! Thanks for sharing it!

You're welcome! More coming this weekend.

Hey, when I try to download it, it says I have to request access. The permissions aren't set correctly on Google Drive.