This the where I'm going with interstellar travel with my Galaxy War 1939 campaign. We'll be testing the rules-y stuff to see if it plays smoothly enough. It might be overly complicated, but I want to add an element of danger and uncertainty. Even though I'm trying to keep our game as streamlined as White Star RAW, I have a few modifications based on the fact that this is a lower-tech setting. The equipment is very specialized and very... analog... the operations are dangerous to the uninitiated, but not insurmountable.

So, I have the write up about the interstellar rail system. Not terribly original -- it's hyperspace with a low-tech 1930's reliance on radio technology and "switch and dial" computational machines. The expert at utilizing this system is the character class, the Radiohack. Coming soon.

As always, let me know what you think... 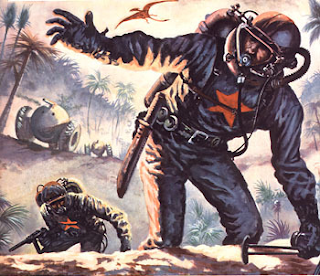 It is thought that space travel was discovered nearly simultaneously across the industrialized world in the late-1920’s. The Austrian scientist, Erwin Schrodinger is credited with the discovery, but many have speculated that Schrodinger only provided the analysis and practical application of extraordinary finds by the explorer Janet Wulsin in the highlands of Mongolia. What was found, exactly, is not known.

What is known is that these discoveries led to limited intra-system space travel in less than 2 years and the discovery of an ancient interstellar “rail” system that connected more than fifty star systems with Earth-like planets to our own.

Within the Sol system, explorers soon found two interstellar portals, or tears in spacetime (one near Titan, Saturn’s largest moon, and the other in orbit around Mars). These tears allowed access to what scientists called “nullspace,” but essentially allowed for fast, direct travel to other parts of the galaxy. The Titan portal led to a star system which came to be known as New Bern. The Mars portal led to the Roosevelt Nebula, a nexus for two other portals. 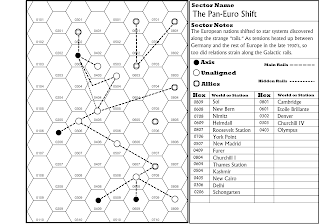 Eduard Spelterini, the famous Swiss explorer, is credited with making the first trip on the interstellar rail system, taking the Titan portal to the New Bern system. Here he discovered the Earth-like planet that he named Léman after the many lakes and oceans found there.

Over the intervening decade, the human race spread far and wide, discovering rails between nearly fifty star systems. The industrialized countries coveted these resources and soon political tensions on Earth were reflected in the stars. 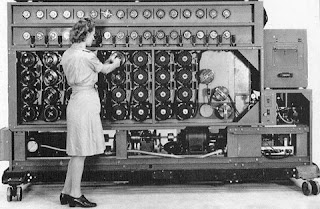 Moving along the interstellar rails, called railjumping, is a complex operation requiring a space vessel to communicate with a central computing system. This is accomplished with a radio device called a rail monitor, on the rail-traveling vessel, which communicates to a rail station. The rail station comprises a small space station that houses a mechanical computing device, continually manned by a group of technicians that receive radio transmissions, perform the necessary calculations, and relay
those calculations back to the vessel’s monitor. This information not only communicates the exact location of the rail portal and proper alignment trajectories, but also acts as a traffic controller, ensuring that vessels do not collide while traveling the interstellar rail. The calculations also keep the vessel properly positioned within the rail so that the ship arrives safely at the next rail portal. The experts at using the rail system and its associated technology are called radiohacks.

Raidohacks have enhanced the capabilities of the rail monitor, allowing it to send short messages through the rail network. This allows for faster communication between systems, though not as fast as some would like. Rail stations can be used to bounce messages through a rail portal and on to the end star system ensuring that messages move through space as quickly as possible. However, the radio waves must still travel through one or multiple star systems in order for the message to reach its destination. Such communication could take hours or weeks, depending on the interconnectedness of the star system and the final destination of the message. Additionally, these radio transmissions can be intercepted by any within the systems that the message transverses, making such communications less than secure. 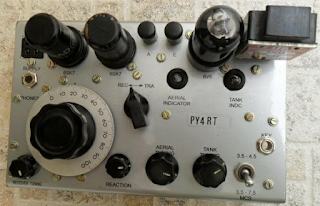 Due to the shifting political situation, not all rail stations are friendly to vessels that wish to travel to certain systems or along certain rails. The vagaries of rail station positioning (proximity to the rail portal disrupts certain radio communications), usually prevents visual confirmation of a vessel’s origin, so a radio code is first transmitted by the ship’s rail monitor to the rail station. These codes are closely guarded secrets, often locking off entire clusters of star systems from unwanted visitors.

There are a number of ways around this restriction, and radiohacks are experts at riding the rails without authorization. Undiscovered rail portals are the usual method, though there are significant risks. A rail monitor can be configured to locate a rail portal, though the exact position is rarely determined. Railjumping without exact calculations could damage or destroy a ship.

Certain devices, all of them cobbled together from old radio monitors and other electronics, can break and transmit proper codes. This runs the risk of alerting an unfriendly rail station of an attempted breach. The typical response to a detected breach is to launch short-range interceptors to either disable the rogue ship and capture the crew or to simply destroy it.

If a friendly rail station is positioned on the other end of the rail portal, the radiohack can attempt to send a message through the rail portal in order to retrieve positioning and alignment information. The only risk here is that the unfriendly station on the front end of the rail could detect the communication and deploy countermeasures.

Finally, codes can be gathered through more traditional means – capturing a rail monitor configured with the proper code, buying codes on the black market, beating the code out of enemy prisoners, etc.

A skilled operator of a rail monitor with a friendly rail station transmitting calculations and no other complications can make a railjump without mishap and in a negligible amount of time. When the situation is more dire, or an unskilled operator attempts to make a railjump, things can get pretty desperate.

In the table below, the standard situations are described, along with duration for certain operations, as well as Success/Failure results, as needed. See the Railjump Mishap Table for those situations where things go awry.

The duration is based on a d20 roll by the operator, and comprises 1 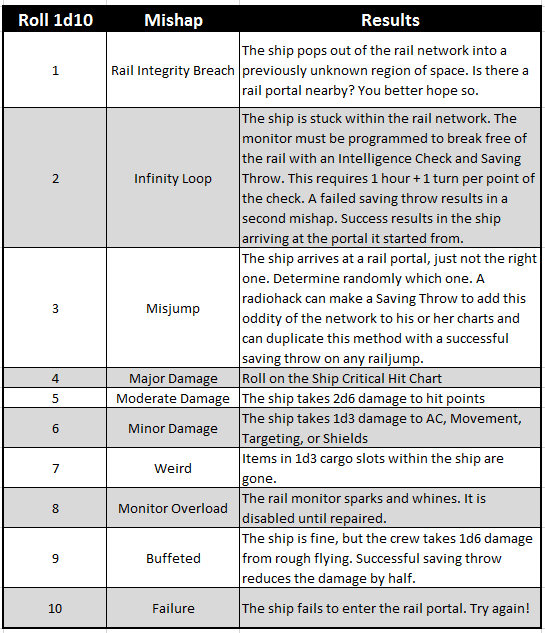