Another patron for +David Fisher's campaign -- this time I wrote it, though he conceived it. The idea of the relationship of entropy to heat loss/transfer was interesting to me. So, credit a lot of this to wikipedia and other reading.

David did all the art...

Entorpus!
Posted by Paul Wolfe at 16:26 No comments: 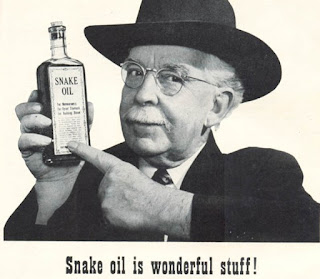 Still loving Black Powder Black Magic by the guys over at Stormlord (+Eric Hoffman +Carl Bussler.) The Brave was the first class I dipped my toe in with. Now I present the Charlatan: part stage magician, part snake-oil salesman, and all hustler.

In addition to a few skills, the charlatan learns one "spell" per level that he or she can mimic with distraction, chemistry and the "belief" of the mark.

Check it out and let me know what you think.

We had planned a night of gaming with some friends I hadn't played with in a while. These guys only get to game about once a year, which is tragic to me. I have an ongoing D&D B/X game running at home. We alternate between in-person games at the house and online games via Google+ and Roll20 -- just depends on whether my middle son is in town or back in Kansas. I had planned to break that out, start the guys at the Keep and let them hex-crawl their way through the evening.

Then The Force Awakens happened. I hadn't even planned on seeing it until after Christmas, but the doom and gloom of long lines and crowded theaters just didn't materialize everywhere, and we snuck into a pleasantly packed theater on Thursday night before the official opening -- barely had to stand in line... it was weird.

Anyway, like most of you, I immediately wanted to run Star Wars again. I never played the d6 version, but my kids' first RPG experience was Star Wars d20 -- it ended up being easier to introduce to younger children because they had a firm basis in the world and the capabilities of the characters. Plus, I mean, it's Star Wars.

Of course, I had about 48 hours to game time. There was no way I was running d20 Star Wars. Hadn't looked at it in years. But, I had White Star by +James Spahn  and a scenario I had started for another campaign using the Graveyard at Lus by +Jason Paul McCartan. I spent an evening making modifications to that scenario and tracking down maps for various Star Wars ships. Spent another evening thinking about characters -- I pre-genned since I knew that would take time from gaming for these guys. So, in this post, I'll talk about characters for Star Wars using the White Star system.

In future posts, I'll talk about the scenario, building the party ship and other ships, the Force, and finally talk about how the scenario played out. Short answer is that the players really enjoyed the simple system and how complex their interactions with the world could be -- without a lot of mechanics to weigh down gameplay.

-=-=-=-=-=-=
White Star is Whitebox Swords & Wizardry at its core, but James did a great job of building a generic sci-fi version of that ruleset. It leans heavily toward space opera (and Star Wars) with its "Star Knight" class, the "Way" and "Void Knights." I wasn't planning on running a "Prequel" style adventure, focusing heavily on Jedi and Sith. I much prefer the Dark Times of the original trilogy, with more common heroes affected by the machinations of larger forces, including their own destinies.

The other classes: Pilot, Mercenary, and Aristocrat are perfectly generic templates to build these types of "normal folks" of the Star Wars galaxy. I'd also already created a Smuggler class for my Galaxy Wars 1939 campaign (over here in the first issue of Radiotapes Intercept #1) -- it's basically the thief class for whitebox with a bit of a interstellar merchant and scoundrel about it.

What I wanted, though, was a little more specificity to the archetypes in the Star Wars universe. So, I took each one of the classes and added an "occupation" of sorts, that gave the characters a couple of extra skills relevant to the universe and the adventure.

For instance, here's the two Smuggler characters -- the pilot and co-pilot/mechanic. Both are 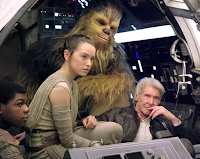 smugglers, but with pilot abilities.

I took the Aristocrat class and built a Merchant, Doctor, and Archaeologist -- all with similar "professional" abilities, but based on the Aristocrat class. Adding a "assess value" type skill for all three of them like I did with the Smuggler base class. I built the soldier directly off of the mercenary class -- just a couple of added spices for flavor.

I left the Species up to the players, so we had an Ewok mechanic, a couple humans, and one player who decided to play a "narwhal." We had no idea what that would look like, but a fat, humanoid narwhal she was. And since her character was female, it didn't have a horn... which seemed more convenient all around. 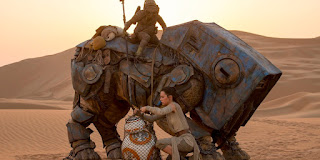 I don't know if this complicates something that could just be emergent in play, but for the actual game I was setting up, I wanted the players to have the time to play without having to spend a lot of time before play developing character archetype concepts. The scenario I'd built was essentially a salvage mission, with the Pilot, Co-pilot and Merchant each owning a third of the ship, with the others being hired guns. I threw in a wild card character -- a "fringer" who's profession was mining. I really liked this catch-all class, as a concept, in the d20 Star Wars system, though I don't know that it was implemented all that well.

You might also notice that I'm using a "Skill" -- this is a simple system similar to the Saving Throw to resolve actions that matter -- repair something under fire, resolve a tense negotiation, etc. I don't know if I'll keep it, but it was interesting to play around with it. I love the single Saving Throw, and I had been using that to resolve critical actions, but I felt like it made an actual saving throw against seriously deadly or weird attacks too mundane if I used the same mechanic for other critical actions. I'll talk more about the Skill Roll when I talk about the actual play.

Next post, I'll talk about the scenario -- developed from Jason's excellent Graveyard at Lus resource.
Posted by Paul Wolfe at 02:06 No comments: 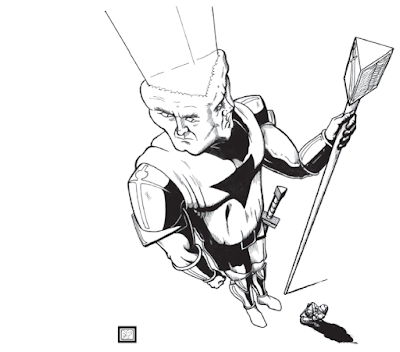 Another Patron Monday (sort of), and this week we have a guest author, +David Fisher of Shinobi 27 Games fame. You may know him from his two modules for DCC: Feast of the Preserver and The Trolls of Mistwood. He's currently working on the Curse of Mistwood to further the series. Or you may know him from his art in a number of DCC RPG third-party publications. I love his work; I have
the t-shirt. And he's done a lot of the art for Patron Monday!

Trisdeus is a god and patron of extreme law, truth and justice. Though his spells are typically more useful outside of combat than during, the adherent to the Tri-God strikes fear into Chaos and disorder by her very appearance.

Check it out, and as always, let us know what you think.

Trisdeus - The Tri-God
Posted by Paul Wolfe at 22:23 No comments:

It's another Patron Monday (late edition). Today's super fun guy is the Nazhghad. Clearly this one was inspired by Aliens/Prometheus -- and related to AKAS, an earlier entry into the Patron Monday annuls.

You may also notice that the Nazhghad is somewhat related to Myrrdin -- being that its current home
lies next to the River Rgene in the Piretis Jungles. It may sound like I had a rip-roaring jungle campaign where all the supernatural beings had inter-related goals and conflicts -- and I do... but it's in a different place. When I was writing these patrons, I needed something to get me "connected." It's remarkably hard to conceive and codify a patron for DCC RPG. If you don't believe me, try it. What worked for me was the introduction -- spicing it up with faraway and interesting places, grounding the patron in a history or story -- CONTEXT -- definitely helped in the process.

Without further ado... here's the godawful Nazhghad, the buzzing demon in your head that drives you to build ever higher, conquer ever wider, and drag living sacrifices, screaming, back to the Thousand Foot Spire.

The Nazhghad
Posted by Paul Wolfe at 00:06 No comments:

We are proud to announce that the print version of The Legacy of Oros, first in a line of Galaxy War 1939 White Star Compatible products, is available from One Bookshelf (DriveThruRPG and RPGNow). The PDF price has been reduced to $4.99, but best value is the physical book: $10 and you get the PDF for free.

The adventure follows the crash of the British transport ship, the Connor, and its precious cargo, the Chinese biologist, Dr. Wang Bao Li. The characters face off against Nazi rocketmen, dangerous bio-weapon creatures, and a mysterious entity calling itself the Oros.

Here's a shot of the mini-comic that +JEStockArt (James Shields) did for the book. So fun. 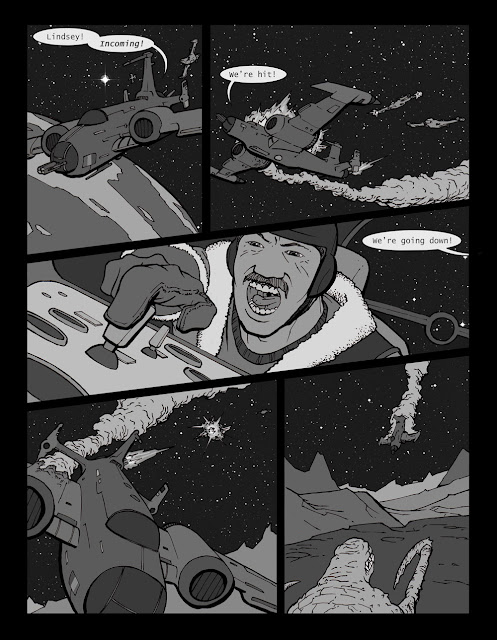 -=-=-=-=-=-=-
I have a few blog posts about the world and additional house rules that we use as part of my home White Star campaign in this setting.

I've been lax in my Patron Mondays, but here's another minor patron. This one was at least partially inspired by Prometheus, the film by Ridley Scott. I wasn't a huge fan of the film, but I really liked the idea of a race of beings that released unholy biological horrors on the universe.

So far, we're up to three patrons -- this one, Myrddin, and Yephriel, the Iron Champion.

And this one has art by +David Fisher from Shinobi 27 Games.

AKAS -- Revered of the Ape-Men!