Swords & Wizardry: The Curse of Cragbridge

The Swords & Wizardry ruleset has always been a favorite OSR flavor of mine. I've run a thief named Samuil Marco in +Jason Sholtis' Operation Unfathomable game for years now.

Here's ole' Sam, the semi-ex-junkie, planescaphe pilot, and the co-boss of a gang of thugs called the Axe of Douches. As envisioned by Chris Brandt (another player in the game) and Jason, himself.

Sam had some issues with some chaos stuff (thus his eyes are full of stars and his hair dances on end and flashes in psychedelic colors). I think Jason always forgets that Sam managed to wrest a magical trident from some big bad that we critted/backstabbed to death in one round. The trident auto-hits once per day for max damage. Sam's a thief. It's really ugly.


Anyway -- I've played a lot of White Star by +James Spahn - which is sci-fi action based on the Swords and Wizardry Whitebox version of the rules. But you probably already knew that. You might not know that I wrote a couple things for White Star -- You can see them on the right there. Couple of one-pagers and a full adventure set in a futuristic early World War II.

All that to say, that S&W is a great ruleset. So easy to write for. So simple to run. I originally published The Curse of Cragbridge as a Labyrinth Lord adventure, but recently converted it over to DCC RPG. I had conceived the adventure as bringing the DCC RPG conceit to Labyrinth Lord/OD&D-esque rulesets. The original monsters, strange magic, and other weirdness with DCC RPG has always been the way I played and run my D&D games. Because, if I have to fight another goblin, stirge or giant rat, I'm going to off myself.

So, here's The Curse of Cragbridge for Swords & Wizardry.

This version has the same fantastic cover by +Gennifer Bone,  great interior art from +Jason Sholtis +Wayne Snyder as well as some additional art by Jacob Blackmon, Malcolm McClinton and Gary Dupis.


I hope you enjoy it and please let me know what you think! 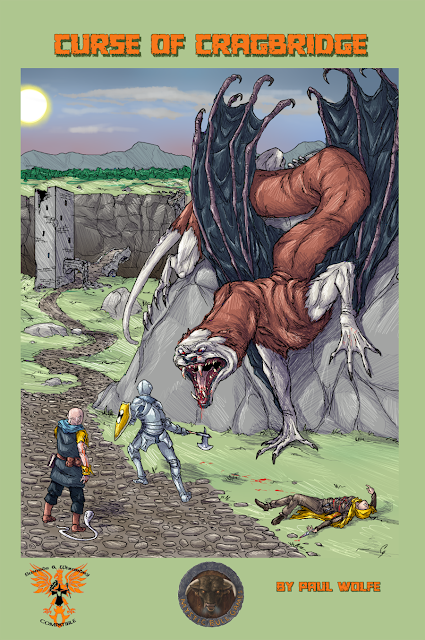 Within the depths of Cragbridge, Horrors Await....

A couple of years ago, I wrote a Labyrinth Lord adventure called the Curse of Cragbridge. My intention with it was to take the same conceits as DCC RPG -- unique monsters, weird magic, and a doomed location -- back to the more hardcore OSR rulesets. My goal was always to bring it BACK to DCC, and it took a lot longer than I expected. Along the way, my home group played in it and I ran +Alex Perucchini, +Tim Other and +Anthony Fournier through a bit of it online. Did the same with +Brenda Wolfe +Marc Bruner and +Tony Hogard at a local game store.

Over the next couple of weeks, I'll be adding some free content to support Cragbridge, including a couple of spells and the default mini-campaign setting that I used for playtest. Cragbridge was always intended to be the beginning of a mega-dungeon -- and I've written a lot of content for it. When will that see the light of day? That's up to you, gentle reader. If you like it, then I'll keep going. If you don't, I'll be weeping in the corner with a bottle of rot gut talking about how I used to be an RPG designer before I took an arrow to the heart...

Anyway, I finally got everything together, including cover art by +Gennifer Bone, interiors by +Wayne Snyder and +Jason Sholtis, as well as some additional art by Jacob Blackmon, Malcolm McClinton and Gary Dupis. I did the map, and I have no apologies. So, here it is.

As always, I hope you enjoy it, and I'd love to hear your feedback.

The Curse of Cragbridge, DCC Edition. 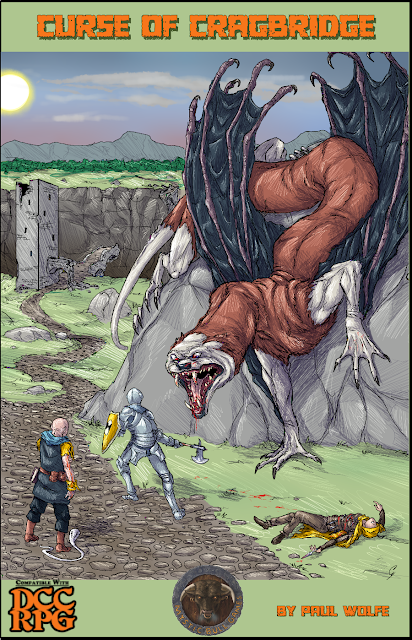 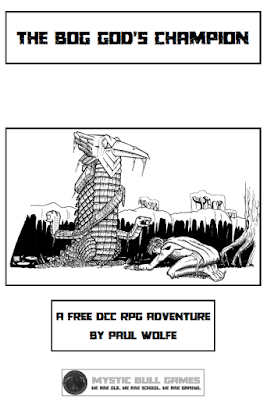 The Bog God's Champion is an adventure for 1st - 3rd level characters and embroils the characters in the machinations of some of the patrons featured in our Patron Monday entries. To whit: Myrddin (the bog god), AKAS and the vile Nazhghad.

Cover art is by +David Fisher -- his illustration of Myrddin's icon.

The Bog God's Champion
Posted by Paul Wolfe at 14:38 3 comments: