Mystic Bull Roundup: Upcoming and Curse of Cragbridge in Print!

My blogging has been sparse lately. In addition to various life challenges, I've been working hard on two new releases. Hoping to see these in print by the summer, but it's slow going.

The first is a DCC RPG sandbox setting in a fantasy late-classical Japan. I've blogged about it before and I even have a lot of alpha material over in its own collection. I'm at the point where I'm running playtests -- testing and iterating -- so I think I'm close on that one. I'm collaborating with +David Fisher on this one.

In keeping with the chanbara theme, I'm working through a product for Swords & Wizardry called Lady Snowbird, set in the final death throes of the samurai era -- 1800's. The concept is based on a lot of the samurai cinema you've seen and loved -- peasants and disaffected samurai off on bloody roads of vengeance. I'm going back an forth on the system -- it's ideally suited for both DCC and Lamentations of the Flame Princess. But, Swords & Wizardry Whitebox is so damned easy to develop with. It may end up with versions of all three. I'll be playtesting some initial concepts (classes, mostly) in the next few weeks. Hit me up on Google+ if you're interested.

Other than that, I have a stack of pre-approved projects for DCC. I have a mega-dungeon that I will someday finish (Curse of Cragbridge was the intro, actually). Finding the time is the issue at the moment. My focus has been on the two projects above for the last few months.

In other news, the Curse of Cragbridge is now available in print for both Swords & Wizardry and DCC RPG. Go pick that up -- it's a steal at $6.50 for the print version, and includes the PDF. 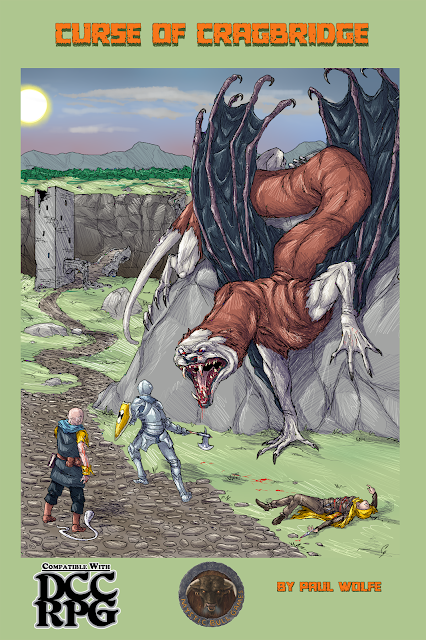