Just over a month ago, +Daniel Bishop and +David Fisher came to me and asked if my little publishing collective could take over publishing DCC Adventure Magazine and News. This was a project we collaborated on a few years ago with another publisher and managed to get the first issue produced -- though only in PDF form. I think all three of us looked at that experience as a good one, overall, and I know for my part, I really liked the art and content that we put together for it.

Well, in short order, we turned around an reprint of the first issue, with much expanded content, some new art and layout, and more importantly, a different focus. Or maybe, a truer focus. Yes, the magazine has Adventures. But, it also now has NEWS. And it's news about the community -- third party publishers, local DCC RPG groups, and new products either here or coming soon. And we have some great non-adventure gaming articles specifically focused on the great things about DCC -- Spellburn, classes, monsters, spells, and random tables galore. 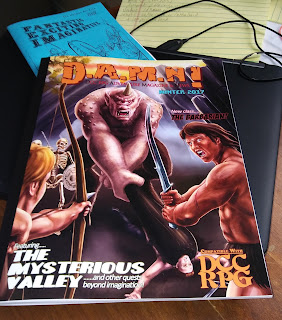 All that to say... It's here. It looks great. And it's available to purchase in PDF or Print on RPGNow/DrivethruRPG.

Go get it, if you want to see what the first step in a true DCC community news and adventure magazine run is going to look like. If you already bought the PDF way back when, you'll be surprised by the new content (76 pages of content in an 84 page book).

And we have a lot more coming, but I'll talk about that in another post.

Our first issue of D.A.M.N. magazine is in the can and getting set up for print. While we're waiting, the table of contents page and the submission guidelines are shared below.

Overall, I'm excited about the tone we're setting -- It's third-party publisher/author/fans from cover-to-cover. Got an interview with +Terra Frank about Dungeon Lord, a sneak-peek at +Thorin Thompson's Sky ov Crimson Flame, something exciting coming from +Reid San Filippo, and some general community news. Add to that an adventure and two articles by +Daniel Bishop, two articles by +Stephen Newton, an article by +Julian Bernick, and classic content from the original first issue from me, +Godric McKellan and +Garett Oliver. Wrapped up all nice and pretty with +David Fisher's excellent art.

I may have Stockholm Syndrome, but I think it looks pretty darn good (I resisted).

Submissions for the Spring 2017 Issue -- I'm looking to have all written content in by end of March and all art by April 15th.

I want to reiterate: We need your content. We commission longer pieces, but all the rest (~3,000 words and less) come from you, the community. We also need art! +David Fisher is our principal artist, but we want to feature art from our great community artists (and give David a break -- he's working on like four books right now). Read the submission guidelines closely, and let's get the Spring 2017 issue filled up with great content quickly. 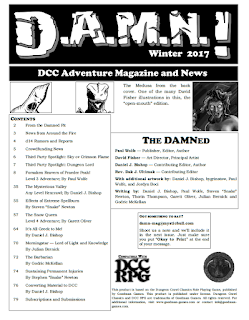 Get the TOC and Submission Guidelines 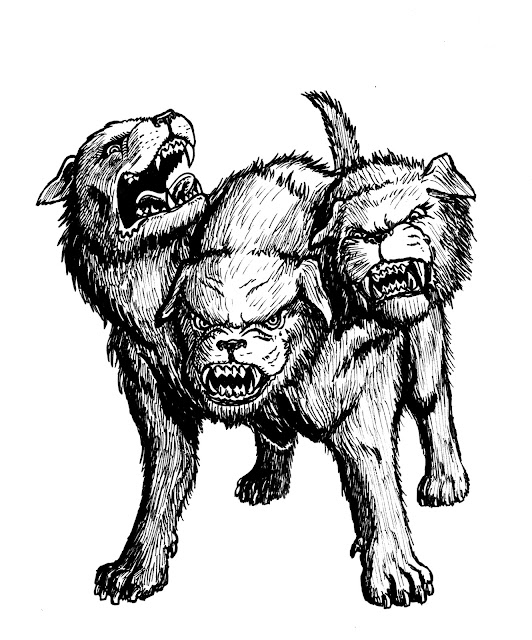 Your feedback is always desired -- feel free to leave a comment about DAMN and what you'd like to see in a community magazine.
Posted by Paul Wolfe at 18:46 6 comments: